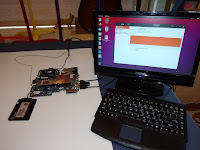 I have a re-purposed AMD64 laptop motherboard, ready to become an experimental Ubuntu Core server.

It's in fine condition. You can see that it boots an Ubuntu LiveUSB's "Try Ubuntu" environment just fine. Attached to the motherboard is a new 60GB SSD for testing. The real server will use a 1TB HDD.

But Ubuntu Core doesn't install on bare metal from a Live USB. It's still easy, though.

1. Boot a "Try Ubuntu" Environment on the target system.

2. Terminal: sudo fdisk -l. Locate the storage device that you want to install Ubuntu Core onto.